What was the 1st Proof Assistant?

What was the first proof assistant? What was it used for? When and by who was it created? Is it still used today? And what was its purpose?

Arguably, the first theorem prover was the Logic Theorist, developed by a team at RAND back in the 1950s, which was used to generate alternate proofs for parts of Russell and Whitehead's Principia.

If you want to see what it looked like, I had a friend at RAND ask the archivist scan the July 12, 1956 revised version of the P-868 technical report which is 68 pages long (an earlier draft is online, too).

Russell wrote a short note to team, which was saved in the RAND archives: 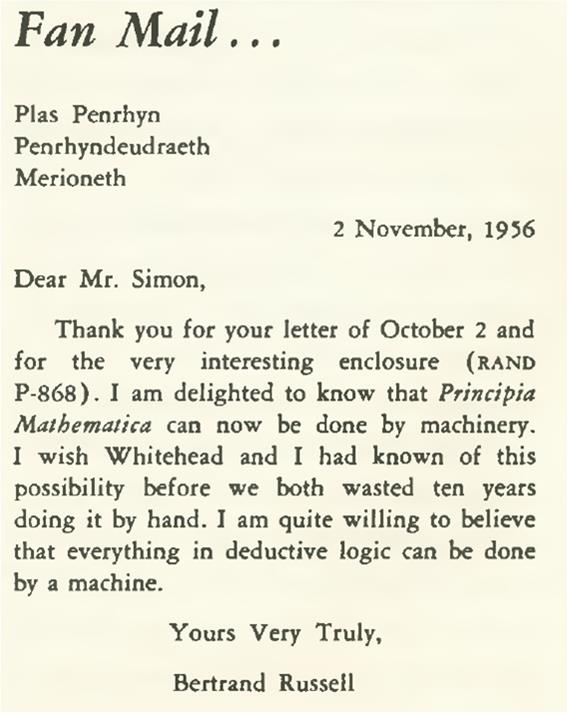 Thank you for your letter of October 2 and for the very interesting enclosure (RAND P-868). I am delighted to know that Principia Mathematica can now be done by machinery. I wish Whitehead and I had known of this possibility before we both wasted ten years doing it by hand. I am quite willing to believe that everything in deductive logic can be done by a machine.

Although it's not used anymore (it was written in assembly for the Johnniac), it inspired the Lisp programming language.

The first (1968) fibrational proof assistant for computers is known to be AUTOMATH prover which was implemented under the lead of Nicolaas Govert de Bruijn (AUT-68). It's the direct ancestor of the "type theoretical" line of proof assistants from which the better known current ones are NuPRL and Coq. The last version is known to be AUT-QE and released under the lead of Freek Wiedijk.

Modern provers of that family nowadays usually use Calculus of Construction with full set of rules, while AUT-68 was using only $\star \leadsto \Box$, but was lacking $\Box \leadsto \Box$. So today we usually take PTS/CoC for educational purposes but not AUT-68.

If you want to feel the type system of proto-provers you should dive into Henk: A Typed Intermediate Language by Simon Peyton Jones and Erik Meijer. As for stable known implementations I would suggest Morte for Haskell by Gabriella Gonzalez and its faster port to Erlang — PTS$^\infty$ by Groupoid.

As for non-fibrational provers in the style of Principia Mathematica (1910), you also can find a lot of implementations, and we also have one for educational purposes — PRINCIPIA, a logical system whose (almost) only inference rule is the substitution rule. It is insipired by Metamath and some Metamath-like systems.

I believe that the Boyer/Moore theorem prover was interactive from the start, though it may have supported a batch mode as well. Commands consisted of axioms, requests to prove particular formulas, and hints concerning rewriting. Boyer and Moore published this work originally in 1975. And it continues to this day in the form of ACL2.

Another very early system was Weyhrauch's FOL. It was an interactive proof checker for first-order logic. I never saw the point even back in the 1970s, since FOL is both inexpressive and easily automated.

The first recognisably modern proof assistant is undoubtedly Edinburgh LCF, which introduced the architecture on which most of today's proof assistants are closely based, especially those of the HOL family. Mike Gordon traces the evolution here.

Not the answer you're looking for? Browse other questions tagged usage history or ask your own question.

16
What is a Proof Assistant?

42
Are some proof assistants better suited for given areas of math than others?
24
Examples of new mathematics discovered through formalization?
9
How did the meaning of "lifting" in proof assistants arise?
20
Impact of "Formalizing 100 Theorems" and what is next
11
How does the formal proof of the four color theorem work?
6
What are good examples of April fools jokes in the proving assistant community?
8
What should be cited for "the Calculus of inductive Constructions"?